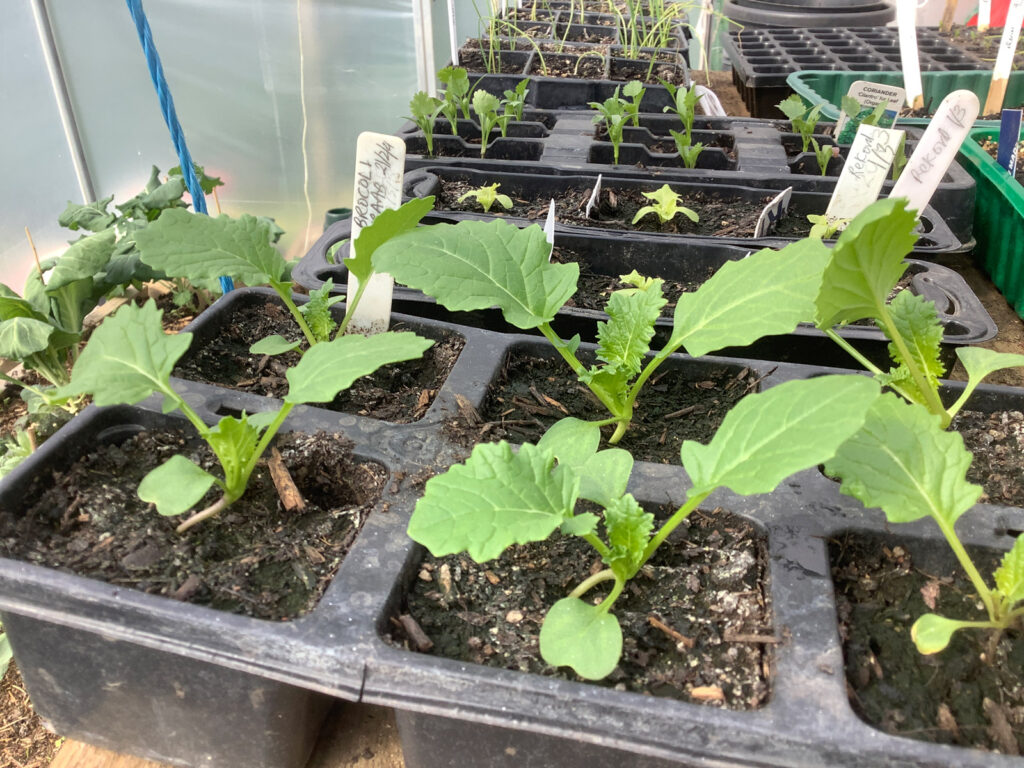 by Jenny Hey and Mark Purrett

Easter holidays; a few promisingly warm days when the bees start flying, birds singing, and a green haze begins to drift across the bleached colours of winter. And then comes the lambing snow, and the old adage chimes as a warning to those whose green fingers are too keen: “Ne’er cast a clout, ‘till May is out.” Whether “May” refers to the month, or the flowering of the hawthorn, the message to growers is essentially the same: don’t get ahead of yourself. Don’t be fooled into believing we have left winter behind. Not just yet.

So what can we do at the moment, that won’t all go to ruin in a late storm or frost? Windowsill sowings of seeds seems like a good idea, and brassicas are something to focus on at this time of year, for now is the time to sow brassicas for next winter. Recommended varieties for Skye are “Nautic” for sprouts, “Westland Winter” for kale and purple sprouting broccoli “early”. There are also quite a few heritage varieties that grow well on the west coast. “Sutherland Kale” was a lost variety, recently rescued, that tells a wonderful success story to support the importance of seed saving

The heritage variety Sutherland kale (“Càil Cataibh” in Gaelic) is available from Real Seeds who were sent a sample of seeds from 89-year old Elizabeth Woolcombe, of West Drummie in Sutherland. She had been growing it for 50 years, having received seeds from Angus Simmonds who was doing research on kales at Edinburgh University at the time.

Real Seeds tried it out and were very impressed. “It is the most vigorous and resilient kale we have seen. It shrugged off attack by aphids, cabbage white caterpillars, ravenous goats, and 70 mph freezing sleet overwinter.

In each case it sprang back, growing new leaves with no trouble, and forming large heads of Kale in spring when at its most valuable. And when it starts to bolt in spring, the flowering shoots are good to eat too, very much like sprouting broccoli shoots.”

It is not surprising that there are a few heritage kale varieties suited to the Highlands, as kale was historically an extremely important crop for feeding both families and cattle through the winter. It is highly nutritious and extremely tolerant of harsh weather conditions. Most houses had kale yards built adjacent to them formed from low stonewalls to protect the crop from the winter winds. These yards are still visible today in many settlement ruins on the west coast.

And for those of us who still have a kale yard … now is the time to enjoy the final flourish of brassicas sown this time last year. Sprouts have probably finished, but purple sprouting broccoli is just beginning, and picked young, eaten straight from the plant can be as much a treat as asparagus. Kale that has overwintered either outside and in poly tunnels starts shooting away with a last lease of life, sweetened by the cold and possibly frosts, it produces a last flush of lovely tender leaves before it finally bolts and flowers.

Crops such as kale are as important now as they were historically for filling the hungry gap in the cropping season for those of us who wish to grow our own. Finding crops that can cope with short days and extreme weather during Highland winters can be problematic. One solution that Ilona Binova has found, which is a fantastic alternative to the traditional growing of brassicas, is growing micro greens.

Ilona set up Skye Microgreens (Instagram: skye_microgreens, FaceBook: SkyeMicrogreens) about five years ago to try to extend our short growing season. She now supplies weekly, 20 boxes of micro greens, and before Covid, was also supplying five restaurants and cafes locally. She has set up her growing in a converted dog kennel using LEDs to provide a constant light source. The kennel stays at a fairly constant 22oC, due to the heat from a freezer and dehumidifier. She grows a variety of brassicas: broccoli, mustard greens, red cabbage, kale, radish and rocket, along with other seeds such as sunflowers, peas, and coriander. She sows direct onto trays of peat free compost which are covered and kept dark until germination, and then placed under the LEDs. They take between seven days to three weeks from point of sowing to harvesting.

Ilona would recommend to anyone wanting to give it a go, to start with something easy like any of the brassicas. Once sown these can be kept dark in an airing cupboard until germination and then placed on a windowsill to continue growing until ready for cutting. They are a fantastic source of micronutrients, and a great alternative for those of us who no longer have kale yards, particularly in early spring when fresh produce can be scarce and we need something to get us through the “hungry” gap. 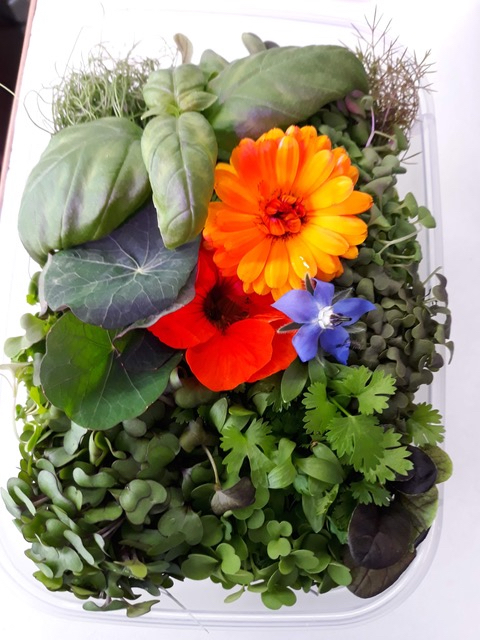 A tray of delicious micro greens 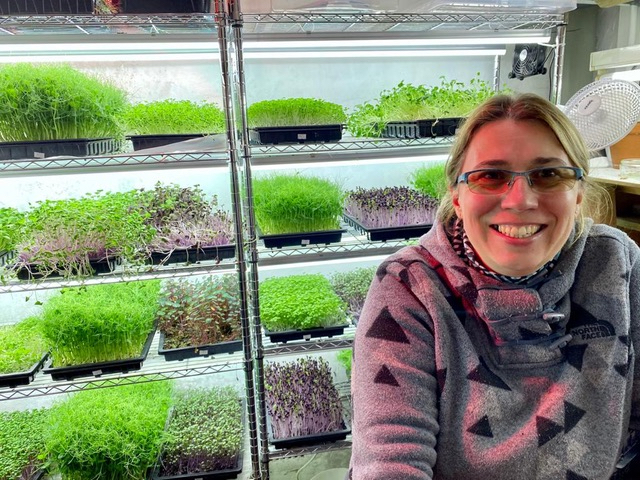